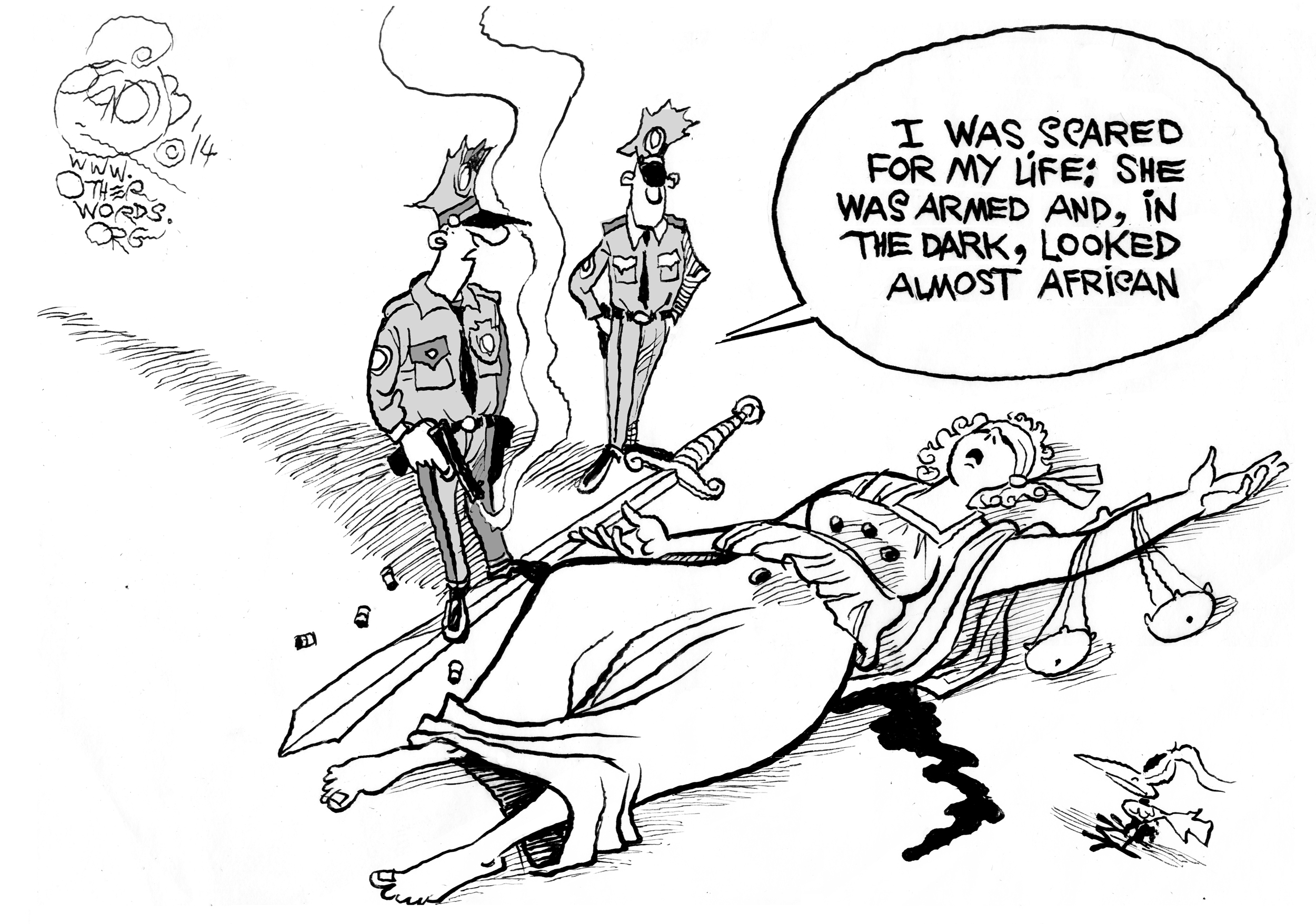 The Prejudicial System, an OtherWords cartoon by Khalil Bendib

White Americans have no right to judge the outpouring of black anger in Ferguson.
By Jill Richardson | December 3, 2014

Shortly before Michael Brown’s fateful encounter with Ferguson cop Darren Wilson, I was appointed as a teaching assistant in a class on race and ethnicity.

I’m white. I didn’t go to grad school to study race — I study agriculture. When it comes to race, I’m clueless.

I wish I could say that I was clueless — that I’ve since obtained a whirlwind education on race in the United States. But that’s not true. If anything, I’ve gained a deeper appreciation of my blind spots.

I probably boast a more diverse group of friends than many of the folks I grew up with. But like the majority of white people, my social networks are still almost entirely white.

I could tell you the names of every single black kid in my grade in my childhood elementary school because there weren’t that many. At the time, I thought they were having the same social and educational experience that I was. 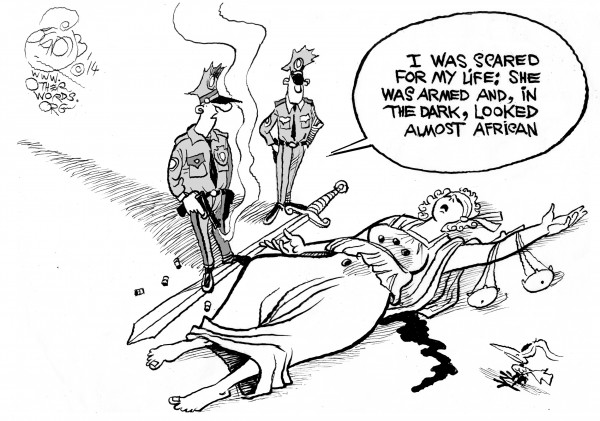 The Prejudicial System, an OtherWords cartoon by Khalil Bendib

I recently reconnected with an African-American guy from my fourth grade class. Our teacher, he told me, was racist. “What?” I responded.

I mean, I was there. But I remember nothing. It was something I didn’t even think about as a kid.

What I do know is this: Whenever I had a run-in with a teacher — or anyone else for that matter — I never had to wonder if they treated me that way because I was white. Not so for my black classmates.

I’ve never had acquaintances come up and touch my hair as if they’re petting a dog. I’ve never had someone say something like, “You’re so cool, I don’t even consider you white!” or “You’re pretty, for a white girl.”

People of color hear statements like these all the time.

When I screw up, I don’t have to worry that I’m representing all white people and ruining things for all of us. When I get pulled over by a cop, I never wonder if it’s because I’m white.

And, what’s more, I never even have to think about this stuff. I can even claim I’m “colorblind” because we live in a “post-racial” America.

As an adult, I’m frequently shocked by how different my black friends’ experience of America is from mine. One friend told me that when she dresses in the morning, she consciously attempts to look “non-threatening” to white people.

Other friends worry about the safety of their teenage sons.

What do you do when your 13-year-old is six feet tall, and you see the police looking at him as if he might be up to something? How do you explain to your rambunctious, innocent nine-year-old that he can’t wear the hoods on his hoodies, just in case?

It’s hard to buy into the “post-racial” lie when you fear that a not-so-colorblind cop might shoot your kid.

Being white doesn’t give me a free pass in life. As a white person with a medical disability that impacts every day of my life, I struggle plenty. But my experience — any white person’s experience — of America doesn’t match what people of color experience.

If this makes you uneasy, there are a few small steps you can take to promote change.

First, admit your ignorance and withhold judgment. White folks don’t know what black folks are going through. How on earth can we judge the outpouring of anger in Ferguson right now?

True, burning down a strip mall won’t help anything. But with a legal system deeply biased against African Americans, white Americans need to understand that this anger comes from an entirely valid place — one that most whites simply don’t understand on their own.

Second, reach out. Make friends. Get to know someone who doesn’t look like you.

In fact, get to know many people who don’t look like you. Because the first step toward bridging the gap between the races in America is forging friendships.