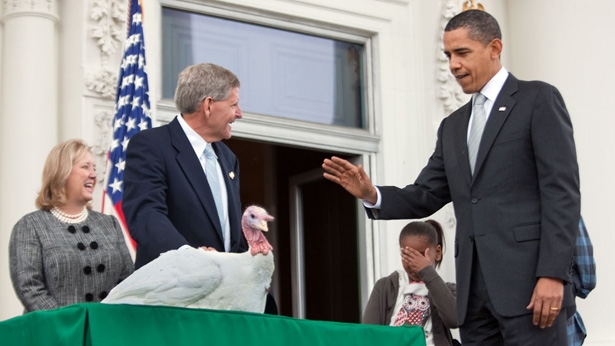 A Big Ag group with a soft spot for the GOP supplied the birds.
By Jim Hightower | November 24, 2014

Thanksgiving — a time of grace and family sharing — will get an extra bit of grace from the White House this year.

Just as the president has done for the last 25 years, Barack Obama will grant clemency to two turkeys that otherwise could’ve become the main entrée for the First Family’s holiday dinner.

This traditional presidential pardon of the gobblers always makes for a fun photo op. It also provides a PR feast for the National Turkey Federation, the lobbying group that arranges for one of its members to supply the birds.

Therein lies this year’s extra touch of grace: The turkeys Obama will be pardoning are actually hard-core Republicans. 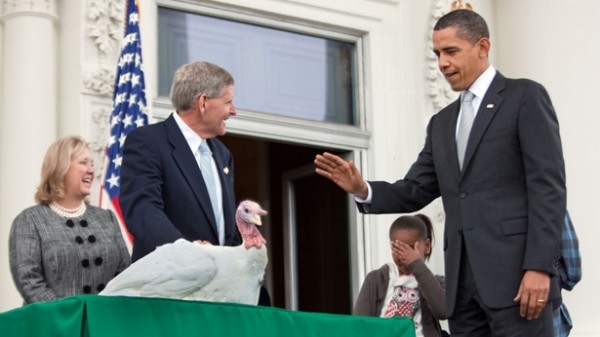 Even if they had tried to vote in the November elections, they would’ve faced the voter ID laws that GOP officials have imposed all over the country. Those laws were meant to suppress the Democratic vote.

I think they would’ve suppressed the turkey vote, too.

However, guess who did vote Republican in the midterms?

If their political contributions are any indication, the turkey industry lobbying group — plus the corporate farm that shipped the two birds to Obama — sure did.

The Turkey Federation fed nearly $160,000 into this year’s GOP congressional candidates. And Cooper Farms of Ohio chipped in more than $46,000 to GOP candidates — plus some $66,000 to the Federation’s Republican electioneering effort.

Cooper Farms had also donated to the GOP’s failed effort in 2008, and again in 2012, to defeat Obama himself.

Yet the Democrat in the White House will shun the chance for partisan retribution, making a unilateral executive decision to spare the lives of the two Republican turkeys.

No doubt this will cause the GOP speaker of the House, John Boehner of Ohio, to sue Obama once again for executive overreach — this time for sparing turkeys without congressional permission.