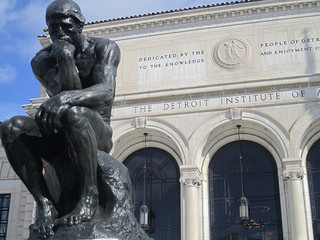 Stripping Detroit of Its Remaining Riches

The state-appointed emergency manager may be on the verge of selling the local art museum's masterpieces to pay the city's bills.
By Donald Kaul | June 12, 2013

My old hometown — or, as I like to call it: “The Late Great City of Detroit” — is threatening to add an oak leaf cluster to the badge of humiliation it wears like an Olympic medal.

It’s bad enough that the city’s previous mayor is awaiting sentencing on corruption charges for which he was convicted in March. And that a former councilwoman and a battalion of city officials are doing time for similar crimes. And that it retains its national primacy in such categories as arson and murder.

It’s bad enough that Detroit has lost well over half of its two million residents since I was growing up there or that 30 percent of the city’s lots have been abandoned and its houses left to rot until someone burns them down.

And it’s bad enough that nearly half of its young workers have no jobs or lack the skill to hold a job if there were any to be had.

It’s also bad enough that the governor of Michigan has appointed an emergency manager with dictatorial powers to try and get control of the financial mess that defines city government there. (And when I say dictatorial, I mean it. Should the city declare bankruptcy, the manager can sweep in and do just about anything he wants, including abrogating union contracts and canceling pension plans.)

Now, Emergency Manager Kevyn Orr seems to think that the city might sell off major art works belonging to the Detroit Institute of Arts. We’re talking top-of-the-line works by Van Gogh, Matisse, Bruegel and Rembrandt, paintings each valued at tens of millions of dollars. He denies that’s his plan, but he did ask the museum for an appraisal of its collection.

The Detroit Institute of Arts (DIA) is one of the greatest museums of the United States. It can hold its head up in the company of similar museums in Chicago, Boston, Cleveland, and even Washington.

More than that, it is one of the last remaining symbols (along with its across-the-street neighbor, the Main Library) of Detroit’s lost glory. The city might not have its belching factories anymore, nor its palatial mansions where the princes of commerce once lived and played, but it does have the museum — one of the last fully functioning institutions left in this dysfunctional city.

Naturally, that’s what the emergency manager wants to loot in order to pay bondholders, to whom Detroit owes some $16 billion. He’s looking for assets to sell and the museum collection is a beaut.

Personally, I think the idea is shameful, akin to selling off one’s children to pay the mortgage. Hard times are no stranger to America’s great industrial towns. Newark, Pittsburgh, and Cleveland have all had them. But none of those cities threatened to sell off their cultural heritage — in Detroit’s case, painstakingly collected over nearly 100 years — to pay the bills.

That’s the problem with giving a city over to an “emergency manager.” He comes with neither a connection to a city’s past nor a stake in its future. He deals with the present, and his charge is to balance the books. Period.

That said, I don’t envy his job.

I’ve spent the past couple of weeks immersing myself in recent Detroit history in preparation for this article. It’s been a dispiriting experience, reviewing the story of a once great city brought to ruin by cupidity, corruption, shortsightedness, bad luck, and racial war.

It has been called, variously, “the arsenal of Democracy,” the “quintessential 20th century city,” “the place to be,” and the “murder capital of the nation.”

But always there was the subtext of hope, the belief that if you just kept plugging along, things would get better.

And now they want to sell off one of the few things left in Detroit that reminds us of what better means.

Last one out, turn out the lights. The party’s over.