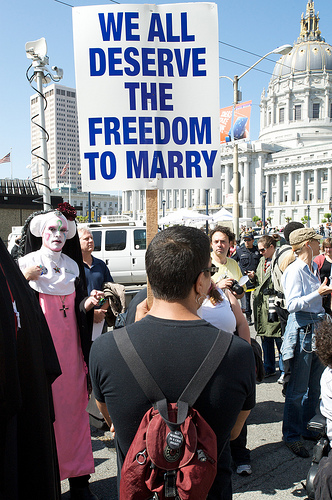 Expanding the franchise would make the institution stronger, not weaker.
By Donald Kaul | April 10, 2013

Confusion reigned supreme in the nation’s highest court last month as it heard arguments on two same-sex marriage cases. Confronted with the possibility of endorsing the right of men to marry men and women, women, the Justices resembled nothing so much as a group of kittens playing with a ball of barbed wire.

They poked at the cases and retreated from them. Then they circled around and poked again, never quite daring to confront the issue directly.

Admittedly they’re strange cases. In one, the Supreme Court was asked to overrule a lower court’s decision that had found unconstitutional California’s Proposition 8 — a ban on marriage equality that the state itself wasn’t willing to defend.

Instead, a group of private citizens with no real standing in the case brought the appeal.

“I just wonder if the case was properly granted,” said Justice Anthony Kennedy, seemingly speaking for a majority of the Court.

So why did the Court agree to hear the case in the first place? Two words: Antonin Scalia. You can always count on him to be on the wrong side of an issue.

Court observers say that he, above all the other Justices, despises the growing trend toward same-sex marriage rights. Thinking that this would be the Court’s best shot to knock it down before it gains even more acceptance, he reportedly talked three fellow conservatives into taking up the case.

The Court spent half the day arguing about whether they should be considering the case in the first place, rather than struggling with its central question: Do gay people have a right to lawful wedded bliss like everyone else?

Not that the rest of the debate was marked by much more clarity.

At one point, Justice Elena Kagan asked how marriage equality would damage traditional marriage. The lawyer for those supporting Proposition 8 responded that the key to marriage is procreation.

That’s news to many heterosexual couples that have no intention of having children. Hasn’t he heard of birth control — you know, condoms, diaphragms, the pill, things like that?

The questioning then veered off into an unproductive discussion of infertile couples, elderly couples, Strom Thurmond, and other matters that had nothing to do with anything.

The bottom line is this: The opponents of marriage equality have yet to explain satisfactorily how allowing gay people to marry would harm “the sanctity of marriage.” I think that expanding the franchise would make the institution stronger, not weaker.

Supreme Court watchers, by the way, expect the justices to duck the issue and send it back to the state. That would be too bad. Rights shouldn’t be left to individual states to grant or not. We have constitutions to protect minorities from majorities, not to let them be oppressed by them.

The second case involved the so-called “Defense of Marriage Act,” in which Congress defined marriage as the union of one man and one woman. It was signed into law by President Bill Clinton, who now says he regrets doing so.

The law was challenged by an 83-year-old woman who was forced to pay much higher inheritance taxes when her wife died than she would have had the federal government recognized their marriage.

Once again, the government had second thoughts and decided not to defend its own law in court. The Republican anti-gay wing of the House took on that task. The Court’s discussion of the case was just as confused as that of the California case.

Bringing clarity to the matter was the woman who brought the claim, Edith Windsor. She and her partner had been together 40 years but only married the last two. And she said it was the best two.

“For anybody who doesn’t understand why we want it and why we need it,” Windsor said, “it is magic.”

You’d think that true defenders of marriage would embrace that sentiment, not oppose it.