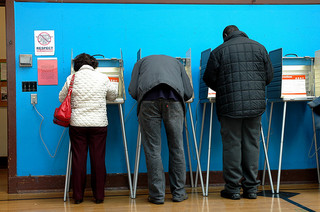 Despite formidable efforts to disenfranchise African Americans in 2012, a larger percentage of black voters than white voters turned out at the polls to assure Obama's victory on Election Day.
By Marc Morial | May 15, 2013

Last summer, I predicted that the African American vote would tip the scales in the 2012 election of Barack Obama. My organization, the National Urban League, foresaw a continuation of a trend that proved to be a decisive factor in Obama’s 2008 campaign.

The Census Bureau has now confirmed our analysis. Not only did the 2012 black vote make the difference in several key swing states, including Florida, Pennsylvania, Virginia and the biggest prize of all, Ohio, but black voters turned out a higher rate than white voters.

The Census Bureau found that, “About two in three eligible blacks (66.2 percent) voted in the 2012 presidential election, higher than the 64.1 percent of non-Hispanic whites who did so. This marks the first time that blacks have voted at a higher rate than whites since the Census Bureau started publishing statistics on voting by the eligible citizen population in 1996.”

Since 1996, black voter turnout rates have risen 13 percentage points, and the number of blacks who voted in 2012 rose by about 1.7 million over 2008. This is even more remarkable given that overall voting among eligible citizens declined last year.

This boost in turnout also demonstrates that, in the face of a widespread voter suppression campaign, a record number of blacks heeded the National Urban League’s call to “Occupy the Vote” — a campaign that reached 10 million people through traditional and social media, phone banking, and grassroots and community outreach. In fact, all Census divisions where voting rates of blacks exceeded those of whites included states that introduced major voter suppression tactics in the year leading up to the election.

While the National Urban League doesn’t endorse individual candidates, we do encourage civic engagement, and our affiliates have always played leading roles in voter registration drives. That’s why we are also pleased that African Americans registered in record numbers last year. The registration rate for blacks rose from 69.7 percent in 2008 to 73.1 percent in 2012 — the highest registration rate ever recorded.

In Ohio, where Obama won 96 percent of the African-American vote, the black registration rate was 74.4 percent. In North Carolina, a state he lost this time around, African-American registration increased from 71 percent in 2008 to 85 percent in 2012 with 80.2 percent of eligible black voters going to the polls, up from 68.1 percent four years ago.

The increase in black voter participation is a turning point for several reasons.

First, it’s clear that Mitt Romney would have eked out a victory in 2012 if voters had turned out at 2004 levels. White turnout was higher and black turnout was lower in that presidential election.

Second, due to an increase in overall minority voting, people of color will be wielding even more electoral clout in the coming years. According to the demographer William Frey, “by 2024, their vote will be essential to victory.”

Third, this demographic shift is prodding both major political parties to increase their outreach and appeal to minority voters and to reassess the impact their policies are having on those communities.

As the Associated Press put it, “The findings represent a tipping point for blacks, who for much of American history were disenfranchised and then effectively barred from voting until the passage of the Voting Rights Act in 1965.”

There’s no doubt that the opportunity to re-elect America’s first black president contributed to record black turnout last year. But, no matter who is on the ballot in 2014 and 2016, we must continue to exercise our voice and Occupy the Vote.