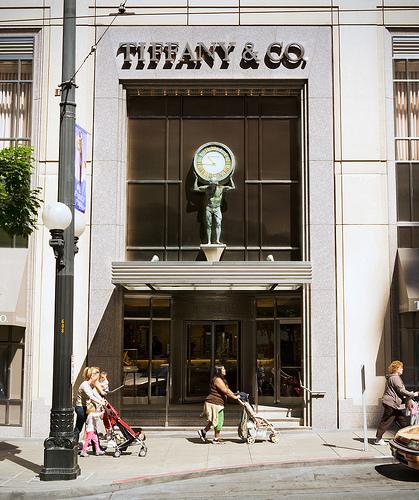 Luxury retailers are enjoying the prosperity of the One Percent. Photo by Steve Minor

‘Tis the Season to Shop at Tiffany’s

Retail sales are up in the top 1 percent's plutonomy, but down in the realonomy where the other 99 percent live.
By Salvatore Babones | December 24, 2011

The economy is expanding, the unemployment rate is down, and consumers are spending again. The National Retail Federation expects holiday season sales to be up 3.8 percent over 2010, and other organizations predict increases of 3.5 percent to 4 percent. It all sounds like it’s shaping up to be a happy holiday season for America’s retailers. 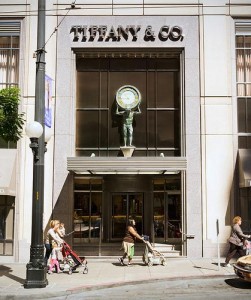 Luxury retailers are enjoying the prosperity of the One Percent. Photo by Steve Minor

But which retailers? Black Friday sales at JC Penney were down 2 percent compared with 2010 and 5 percent at the Gap, Bloomberg News reported. Sales at Kohl’s were down 6.2, while Gap’s discount line Old Navy reported a fall of 7 percent.

On the other hand, sales at upscale stores are up — and up more the more upscale the store. Black Friday sales at Macy’s were up 4.8 percent, Nordstrom’s rose 5.6 percent, and Saks Fifth Avenue’s spiked by 9.3 percent, according to The New York Times.

Meanwhile luxury leader Neiman Marcus sold out of the Ferraris in its Christmas catalog in less than one hour. Neiman’s $125,000 bookshelves are also selling well, New York magazine reports. (Not to worry, they come pre-stocked with books). “The most affluent luxury customer is spending with confidence,” Neiman Marcus CEO Karen Katz told Reuters.

Whew! We were all worried about the most affluent luxury customers. After all, sales growth at Tiffany’s has recently slowed to the low double-digits. Its stock has taken a beating.

In 2005 three Citigroup stock analysts announced the arrival of a new kind of economic system, which they dubbed the “plutonomy.” They pointed out that aggregate statistics like national retail sales had become so skewed by the spending of a few wealthy people as to be almost meaningless. In their own words:

The World is dividing into two blocs — the plutonomy and the rest. The U.S., UK, and Canada are the key plutonomies — economies powered by the wealthy. In plutonomies, the rich absorb a disproportionate chunk of the economy and have a massive impact on reported aggregate numbers like savings rates, current account deficits, consumption levels, etc. There is no “average consumer” in a plutonomy. Consensus analyses focusing on the “average” consumer are flawed from the start.

Six years later, this analysis is more accurate than ever. Yes, total retail sales are up this year. And the economy is growing. But is the recession over?

If it doesn’t feel like the recession is over, that’s because nearly all of the country’s national income growth is going to the top 1 percent of the population. It’s that same top 1 percent of the population that’s driving the rise in retail sales. The plutonomy is growing, but the “realonomy” — the real economy in which the rest of us live — has been stagnant for three years now. In fact, it’s hardly grown at all since 1999. And it wasn’t going all that strong even then.

It’s been widely reported that median incomes have been stagnant since the 1970s. What’s been much less reported is that even college-educated professionals’ incomes have been falling for a dozen years. Adjusting for inflation, no group below the top 5 percent has seen its income rise since 1999.

Among Americans with high school degrees only, median incomes have fallen 10.4 percent since 1999. Among Americans with college degrees, median incomes have declined by 7.6 percent. As a result, even families at the 95th percentile of the U.S. income ladder have seen no raises since 1999. Their incomes are down on average 1.2 percent in real terms, from $202,850 to $200,354.

When the data show that no one in the bottom 95 percent of the national income distribution has seen a raise in over 12 years, it’s no wonder that holiday sales are driven by luxury goods.

All that talk about “the 1 percent versus the other 99 percent” really is true. Before 1973, America’s economic prosperity was widely shared. In the 1980s and 1990s most of the country’s economic growth went to the top 20 percent. In the 2000s, rising prosperity benefited only the top 5 percent.

Since 2008, only the top 1 percent have seen their incomes grow. They’re Neiman’s “affluent luxury customers.” Pity them. At Christmas of all times it is wise to remember that “it is easier for a camel to go through the eye of a needle than for a rich man to enter the kingdom of God.”

There’s no word on what books are included with that Neiman Marcus $125,000 bookshelf, but I know one I might recommend.

Salvatore Babones is an American sociologist at the University of Sydney and an Institute for Policy Studies associate fellow. His book on the American economy, Benchmarking America, is due out in 2013. www.ips-dc.org