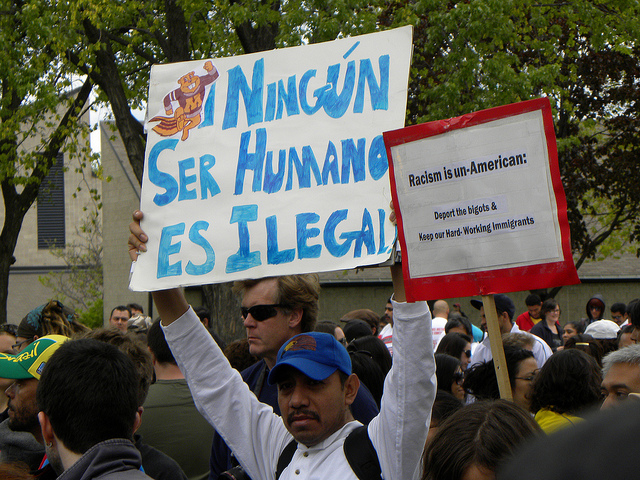 What Trump Wants on Immigration Is Ethnic Cleansing

The president's "open hand" to Democrats is full of poison pills.
By Peter Certo | January 31, 2018

I’ll be honest: I didn’t watch Trump’s State of the Union address when it aired.

Instead, I put my baby to bed and watched reality TV with my wife. If that rattled a few brain cells, hopefully I saved a few more by not guzzling the bourbon I’d set aside to steel myself for the speech.

The next day’s headlines put an end to this brief indulgence in self care.

Trump had extended an “open hand” to work with Democrats on immigration, they reported. He crowed that he’d come up with a “bipartisan approach” that “should be supported by both parties as a fair compromise.”

The first part of the deal should sound familiar: Trump said he’d support “a path to citizenship” for nearly 1.8 million undocumented young people, or Dreamers, in exchange for his border wall.

What Trump didn’t say was that he’d already removed deportation protections from the 700,000 young people who rely on the DACA program, which Trump unilaterally revoked. And he’d already rejected an offer by Senate Democrat Chuck Schumer to fund the wall in exchange for authorizing those same people.

Democrat Luis Gutierrez, perhaps the staunchest wall critic and immigrant advocate in the House, even said he’d “take a bucket, take bricks, and start building it myself” if it saved the Dreamers.

Trump’s about-face on that deal is why the government shut down this January. 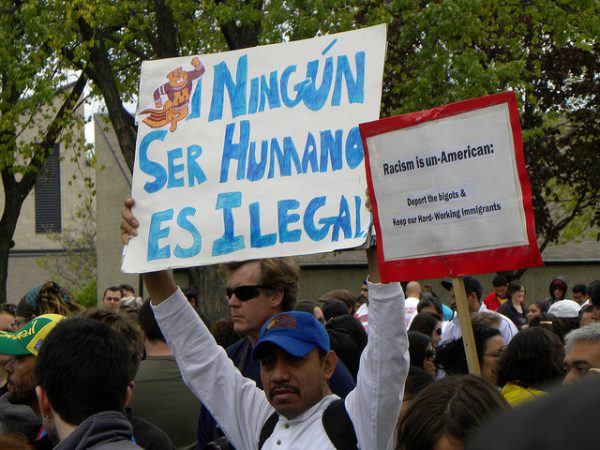 Now Trump wants two more enormous concessions: an end to the so-called “diversity visa” program and the end of family reunification policies for documented immigrants who are already here.

Trump rattled off these demands like they were perfectly reasonable — “a down-the-middle compromise,” he called them. They’re not. In fact, one former speech writer for the last White House called them “a white nationalist wish list.”

That’s because, according to immigration analysts, those latter two provisions would cut legal immigration by nearly half. Half.

And to get that, Trump’s ransomed nearly 2 million Dreamers, whom 80 percent of Americans support legal status for.

He’s taking them hostage, he says, “because Americans are Dreamers, too.” All you need to know about that last remark is that former KKK leader David Duke quoted it right back on Twitter, adding “Thank you, President Trump.”

Let’s put all this in context. Trump’s offering a fig leaf of legal status for a relatively small slice of the undocumented population. In return, he wants to permanently — and drastically — reduce the number of all immigrants who come to this country.

What Trump and his GOP backers want is ethnic cleansing.

It’s not just the Dreamers Trump has endangered, after all. He’s unleashed his ICE stormtroopers on hundreds of thousands of immigrants with no criminal backgrounds, often in hospitals, churches, and schools.

And wherever he can, he’s turned perfectly legal residents into deportable immigrants overnight.

With the stroke of a pen, he ended protections for 200,000 Salvadorans and 60,000 Haitians, while 57,000 Hondurans wait in limbo. And he’s brought refugee admissions to their lowest levels in over three decades, despite a global refugee crisis.

All that tracks perfectly for a guy who called darker-skinned countries “s—holes” and wondered why we can’t have more immigrants from Norway.

Democrats who’d offer a border wall in the face of all this miss the point: That “open hand” is full of poison pills.