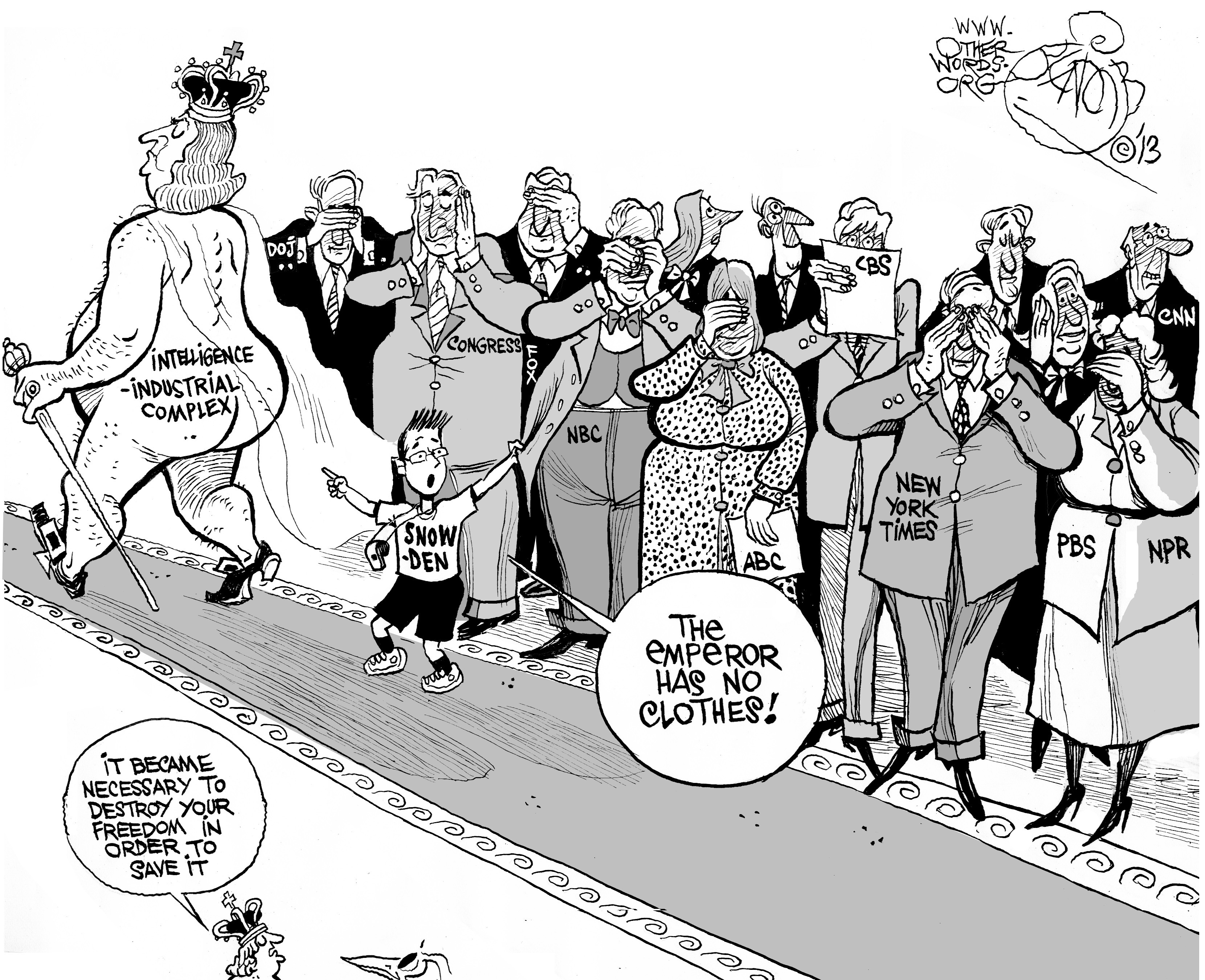 The Naked Dragnet Emperor, an OtherWords cartoon by Khalil Bendib

We have a right to be left alone unless the government can give us a very good reason to the contrary.
By Donald Kaul | June 19, 2013

In 1929, Secretary of State Henry Stimson dismantled the department charged with breaking codes and learning other nations’ secrets. Asked why, he said:

“Gentlemen don’t read other gentlemen’s mail.” Some sources quote him less elegantly as saying “each other’s mail,” but you get the gist. And boy, have we ever come a long way.

We still pay lip service to our “right to privacy,” but in reality we don’t have one. When you make a phone call, send email, buy something online, or arrange for an automatic withdrawal from your bank, you open up your life to people who would seek to mine it for their own purposes, good and evil. 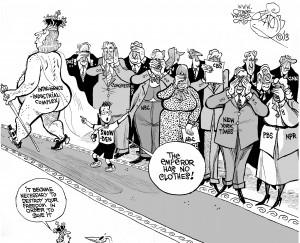 The Naked Dragnet Emperor, an OtherWords cartoon by Khalil Bendib

The latest assault on our private lives was revealed the other day when an employee of a private contractor revealed that the National Security Agency is clocking all our calls and emails — where they’re coming from, where they’re going. The authorities say widespread snooping is a vital tool in our never-ending fight against terrorism.

This dragnet has some people deeply upset. Others, not so much. It clearly falls short of the Orwellian nightmare of actual eavesdropping — so they tell us — but that dystopian nightmare is only a click away.

The young man who gave away the game said he did it out of patriotism. “The public needs to decide whether these programs and policies are right or wrong,” said Edward Snowden.

President Barack Obama said he welcomed the debate. Then he sent his agents out hunting for Snowden, perhaps to give him the Medal of Freedom. Not.

The situation is a real curveball for conservatives. They hate Obama and live to criticize him. But they also love national security above life itself and would never stand in its way, no matter what. They think Snowden is a traitor and should be hanged (if not dismembered).

Liberals are also in a delicate spot. They’re very suspicious of the gigantic national security apparatus we’ve built and don’t like the idea of the government being able to snoop on their private conversations. Progressives wanted Obama to put an end to that sort of thing, not expand it.

As a result, many liberals consider Snowden a hero, like Daniel Ellsberg, the fellow who spirited the Pentagon Papers to the newspapers that published them.

Ellsberg himself has said Snowden’s leak was even more important than his own. He also likened the vast surveillance operations to the extremes seen in East Germany, declaring “the so-called intelligence community has become the United Stasi of America.”

I feel very strongly both ways.

On the one hand, I think the Constitution does grant us a right to privacy. The document may not do so explicitly, but this right is embedded in the right to free speech, freedom of assembly, religious freedom, and the freedom from unreasonable search and seizure. We have a right to be left alone unless the government can give us a very good reason to the contrary.

On the other hand, I have no desire to get blown up when I go to my neighborhood coffee shop. I’m willing to give the government a good deal of leeway to prevent that.

It’s been nearly 12 years since the 9/11 terrorist attacks. We haven’t had a truly major event like it since and that’s probably not an accident. I think our security forces are doing something right.

All presidents face this balancing act between freedom and security. Pretty much all of them, regardless of ideology, come down on the side of playing it safe.

I guess I’m OK with that, sort of. I just wonder where it’s all going to lead. One minute, the government is tracking your phone calls. The next minute, you’re living in East Germany.