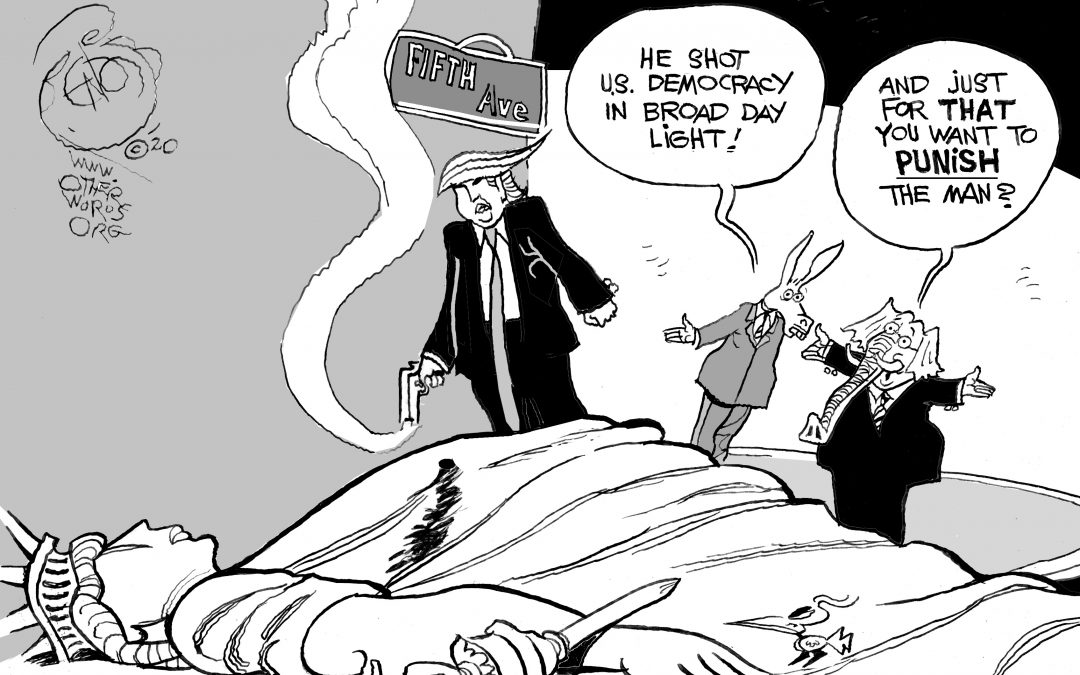 This week, new revelations from John Bolton — Trump’s former national security adviser, and nobody’s idea of a left-wing activist — may shake the resolve of enough Senate Republicans that a few will actually vote to introduce evidence into the Senate’s impeachment trial.

Evidence, at a trial? What a concept.

This week in OtherWords, attorney Mitchell Zimmerman says he’s never seen such a brazen show trial in all his years practicing law — including jurors collaborating with the defense and announcing their verdict ahead of time, trial organizers refusing to admit any evidence at all (really), and a judge who doesn’t seem to care.

Elsewhere, there are scandals of a different nature at work. As Sam Pizzigati explains, Trump’s EPA has been openly collaborating with chemical companies who want to dump cancer-causing chemicals on American communities. He wonders: Why isn’t this the biggest scandal of all?

Also this week, Jill Richardson explains the importance of listening to people with disabilities, Jim Hightower bids adieu to super rich Americans who want to become tax refugees, and Khalil Bendib says Trump’s famous “Fifth Avenue” scenario is playing out just like he said it would.

The Senate’s Make-Believe Trial of Donald Trump | Mitchell Zimmerman
In my 40 years as a lawyer, I’ve never seen a trial flout the basic requirements for fairness so brazenly.

Trump’s EPA is a Huge Cancer Risk | Sam Pizzigati
Industry-friendly regulators are letting chemical companies flood the country with toxins. It should be a scandal.

How to Help Someone with a Disability: Listen to Them | Jill Richardson
Be present. Empathize. Don’t scold them for their problems or try to explain why they’ll have to suck it up.

Trump Shoots Democracy on Fifth Avenue | Khalil Bendib
And Republicans are responding just like he predicted they would.

The Court Ruling That Sold Our Democracy | Tiffany Muller
Ten years after Citizens United, the damage is broad and deep — but we can still fix it.

What We Lose When We Lose Wildlife | Courtney Bourgoin
The climate and mass extinction crises are interwoven, but we are equipped with the solutions.

‘Little Women’ and the American Attitude Toward Poverty | Jill Richardson
We’ve advanced beyond Little Women’s 19th century gender roles. Let’s get past its outdated moralizing about poverty, too.