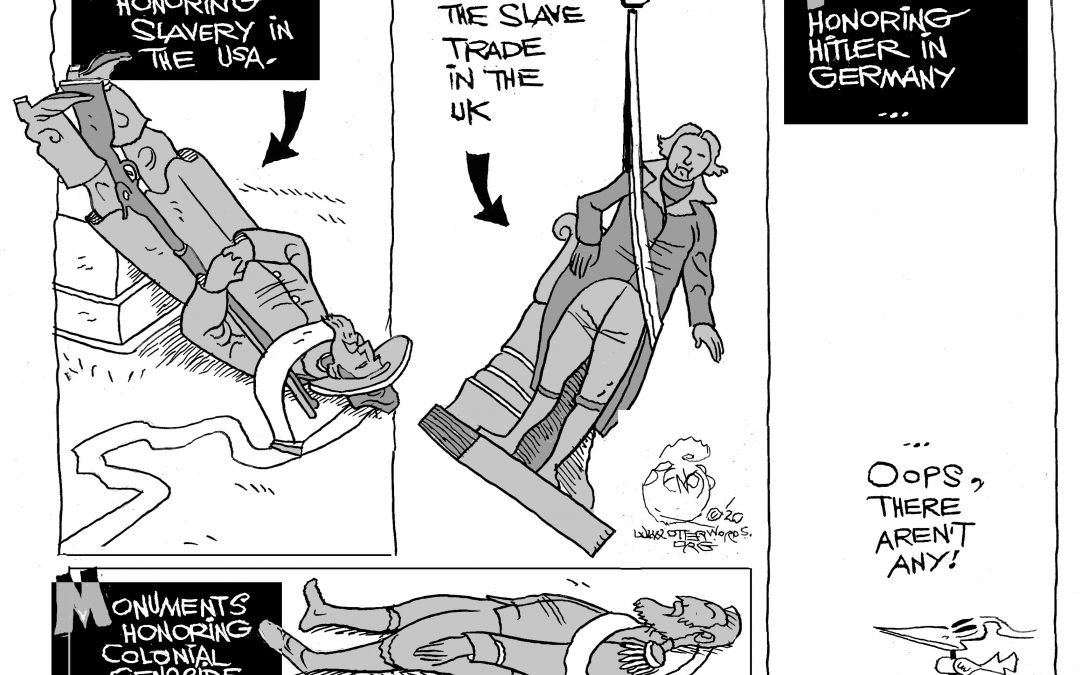 This week, a surprise Supreme Court ruling marked a stunning victory for LGBTQ activists, who’ve campaigned for years to prevent employment discrimination on the basis of sexual orientation or gender identity.

This week in OtherWords, Karen Dolan writes that this a moment to celebrate, for more reasons than one. And Jill Richardson reflects on how coming out changed her view of the right timeline for major changes like these to unfold.

Also this week, Mesha Jefferson shares a story from Valusia County, Florida, on how protests against police violence and racism have spread even to small towns and suburbs in so-called Trump Country.

In pandemic news, Martha Burk argues the closure of child care centers shows the need for a national child care system, and soon. And Jim Hightower calls out the “mask profiteers” who took federal money for overpriced PPE masks that didn’t work.

Finally, cartoonist Khalil Bendib observes that the folks now pulling down statues may know their history best of all.

The Fight for Equality Just Won a Huge Victory | Karen Dolan
There’s a lot of bad news out there, but I hope we’ll celebrate amid the pain.

A Ridiculous Debate, But a Welcome Ruling | Jill Richardson
Thanks to the Supreme Court, now I have rights that I should have had anyway. Others deserve the same.

Monuments to Hate | Khalil Bendib
The people pulling down statues may know their history better than those who defend them.

Defund the Police, Invest in Communities | Ken Makin
Local governments have a revenue problem, while America has a policing problem. There’s a simple solution.

A Bittersweet Juneteenth | Diallo Brooks
Our ancestors were emancipated on Juneteenth, but we’re still fighting for true freedom in this country.

A Matter of Life and Breath | Josie Moberg
Firing tear gas at nonviolent demonstrators is unconscionable — especially in a respiratory pandemic.

Riots Are as American as Apple Pie | Ricky Riley
Mostly, the argument is over who gets to riot — and why.