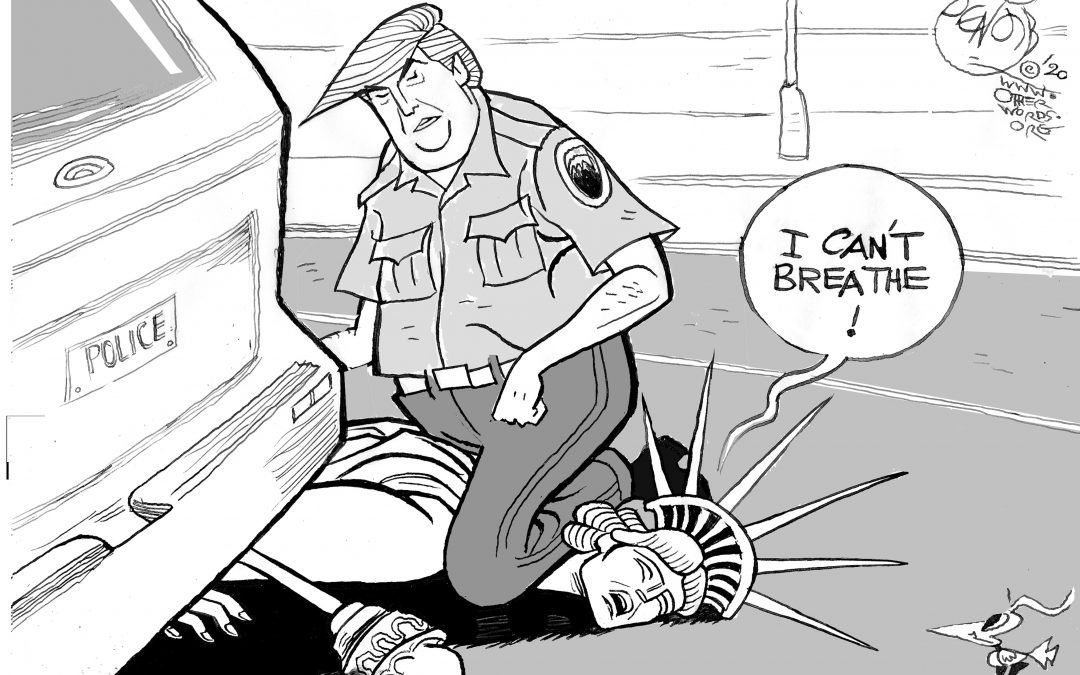 Decades of roiling injustices have boiled over in America.
By Peter Certo | June 3, 2020

Decades of roiling injustices have boiled over in America. This week in OtherWords, we’re proud to share a diverse array of voices on the fight against racism and the state institutions that carry it out.

Tracey L. Rogers begins by noting the obvious contrast between how armed, mostly white protestors demonstrating against public health measures were treated, compared to black protestors nonviolently demonstrating for their very lives. While some protests saw violence, Jill Richardson adds, it’s not always clear who was actually responsible — and changes nothing about the fact that racist police killings need to end.

In a particularly notorious incident, President Trump had peaceful protestors violently expelled from Washington’s Lafayette Park so he could stage a photo-op at a church. Sister Karen M. Donahu, a Catholic Sister of Mercy, says the hypocrisy of that gesture was “almost too much to bear.”

Also this week, Ron Carver offers a reflection rooted in his work with the 1960s civil rights movement. Ron shares a devastating story about his own colleagues who were lynched, and calls on white Americans not to leave the fight to stop lynchings today to their black neighbors alone.

Finally, it’s worth remembering that all this is happening amid a devastating pandemic, which has been particularly deadly for black Americans. Jaelani Turner-Williams shares a dispatch from Columbus, Ohio on the dual public health crises of COVID-19 and police violence, while single mom Denita Jones shares her story of being forced back to work in Texas, long before it feels safe.

I’m Outraged by Trump’s Church Photo-Op | Sr. Karen M. Donahue
As a Catholic sister, I think Trump should read his Bible, not pose with it.

Racism Is a Public Health Crisis | Jaelani Turner-Williams
African Americans were already reeling from COVID-19 when a new wave of police violence hit us.

I Remember the Lynchings of the 1960s. They’re Still Happening | Ron Carver
My civil rights movement colleagues were murdered in the 1960s, when lynching was common. Sadly, it remains so today.

Going Back to Work in a Pandemic | Denita Jones
I don’t feel safe going back to work, but the state of Texas is forcing me to put my health and my family at risk.

It Doesn’t Matter Who Protested and Who ‘Rioted’ | Jill Richardson
We don’t know who’s carried out violence and vandalism or why. We do know police keep killing unarmed black Americans.

Even Now, Our Leaders Are Still Putting Their Faith in the Rich | Shailly Gupta Barnes
It has become crystal clear during this pandemic that working people fuel this economy, but they’re the ones bearing the cost.

We Need a Public Option for Banking | Raul Carrillo
As families struggle to get stimulus checks, it’s time to fix the rusty pipes of our inequitable financial system.

It’s Absolutely Not Time to Cut Food Stamps | Jill Richardson
Tens of millions of us are out of work. Why on earth is Trump trying to cut food aid.

A Simple Solution for the Coronavirus Crisis in Prisons | Robert P. Alvarez
Releasing low-risk inmates would ease the risk that sky-high prison infection rates pose to all of us.