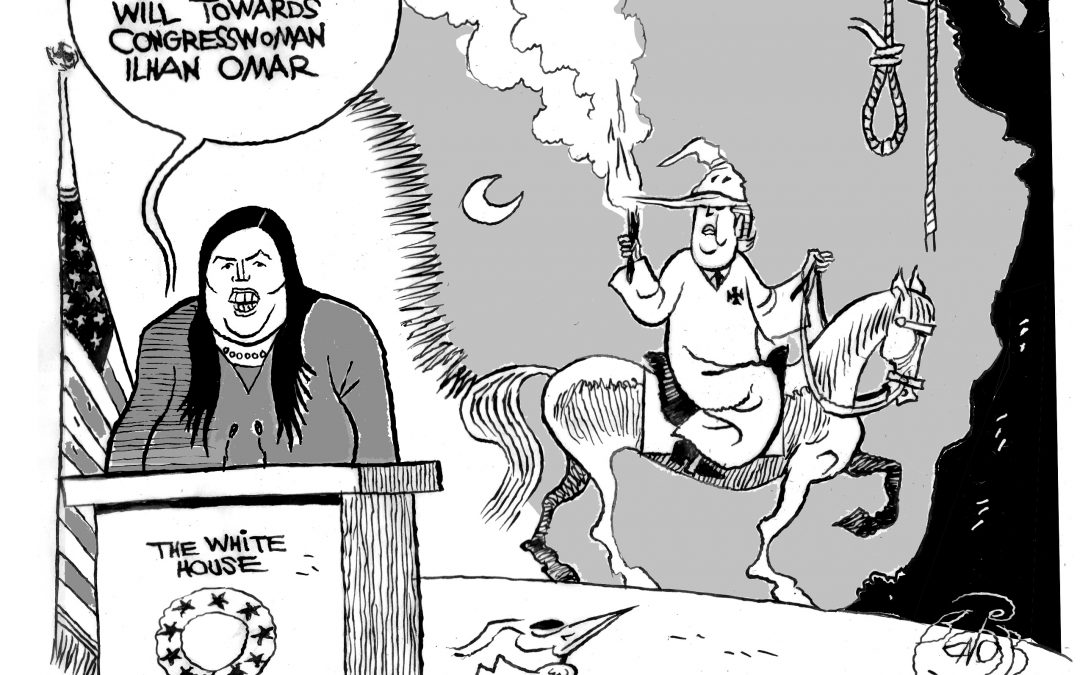 With Mother's Day coming up, Karen Dolan worries for her trans teenager.
By Peter Certo | May 8, 2019

This week, the Trump administration rolled out new guidelines that would allow medical providers to refuse treatment to LGBTQ people. In states like Texas, lawmakers are exploring even more sweeping restrictions.

With Mother’s Day coming up, Karen Dolan looks at this gathering darkness and worries for her trans teenager. And Jill Richardson argues that LGTBQ discrimination should be just as illegal as racial discrimination, which was similarly justified on religious grounds.

Also this week, Sarah Anderson calculates that the minimum wage for workers at the bottom would be $33 an hour today if it had kept pace with Wall Street bonuses for those at the top. Jim Hightower says CEOs really do want to replace you with robots. And Khalil Bendib draws a dark mock-up on Trump’s incitements against Rep. Ilhan Omar.

Finally, on a more hopeful note, union leader Héctor Figueroa and the Sierra Club’s Ben Beachy explain how the Green New Deal could save our economy along with the planet.

All I Want for Mother’s Day Is Equality for My Child | Karen Dolan
My child has fought her whole life for her right to exist. This administration wants to take that away.

Save the Planet — with Good Union Jobs | Héctor J. Figueroa and Ben Beachy
The Green New Deal is the best plan yet to push wages up and pollution down.

How Wall Street Drives Racial and Gender Inequality | Sarah Anderson
If the minimum wage had kept up with Wall Street bonuses, it would be worth $33 today, instead of just $7.25.

You Don’t Get to Discriminate Just Because You’re Religious | Jill Richardson
Racial discrimination is illegal even if it’s religiously based. Why should LGBTQ discrimination be any different?

Beware AI-Loving CEOs | Jim Hightower
Privately, CEOs are gushing about the possibility of replacing their workforces with robots.

A Border Crisis of Our Own Making | Jean Stokan
For 30 years I’ve led faith delegations to Central America, seeing firsthand how U.S. policies displaced the people now arriving at our border.

The Real Threats to Free Speech on Campus | Gloria Oladipo
Conservatives complain when student protest hate speech, while progressive professors are the ones losing their jobs for speaking out.

Peter Certo is the editorial manager of the Institute for Policy Studies and the editor of OtherWords.org