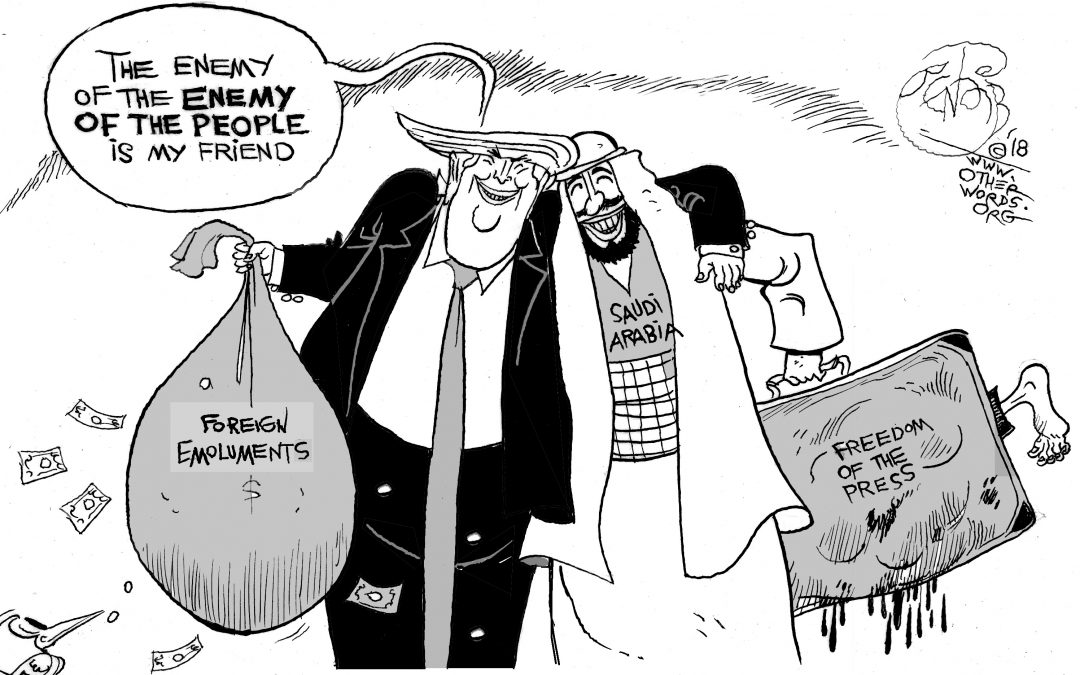 As grisly details continue to emerge about the murder of Saudi journalist — and U.S. resident — Jamal Kashoggi, the Trump administration is standing steadfastly by the Saudi authorities who appear to have ordered the attack. The headlines look bad, but it’s nothing a few emoluments can’t fix, cartoonist Khalil Bendib speculates this week.

Also this week, Jill Richardson wades into the discussion of Elizabeth Warren’s claim to Native identity. The DNA may indicate some ancestry, and Trump’s “Pocahontas” slur is obviously racist. But there’s a subtler issue over Warren’s right to claim an identity in an impacted community apparently without consulting them, Jill explains.

Finally, Norah Vawter argues that “moderation” isn’t winning elections or policy fights for progressives, so they might as well go bold. Former Ohio sheriff John Tharp and Maria Foscarinis offer a bold idea of their own: an end to all laws criminalizing homelessness. And Jim Hightower accuses the GOP of stealing people’s votes.

Progressives Need to be Bold Enough to Fail | Norah Vawter
I don’t believe that we’re going to create real change through the compromises and decorum of so-called moderates.

All Laws That Make It a Crime to Be Homeless Should Be Repealed | John Tharp and Maria Foscarinis
Here’s what should replace them.

Stealing the Vote | Jim Hightower
The GOP isn’t out to “win” elections anymore. They’re just trying to make sure anyone who might vote against them can’t.

Enough Folded Flags: Military Families Speak Out Against the War in Afghanistan | Stacy Bannerman
A nation that doesn’t remember the people sent to fight on its behalf has no business sending more.

Nobody Should Be Poor in the United States, Period | Josh Hoxie
Amazon’s wage hike is welcome news, but nobody’s well-being should depend on the whims of billionaire CEOs.

Virginians Show the Real Face of Poverty | Saurav Sarkar
Over 40 percent of Virginians struggle to get by — a problem made worse by voter suppression and military-first spending priorities.