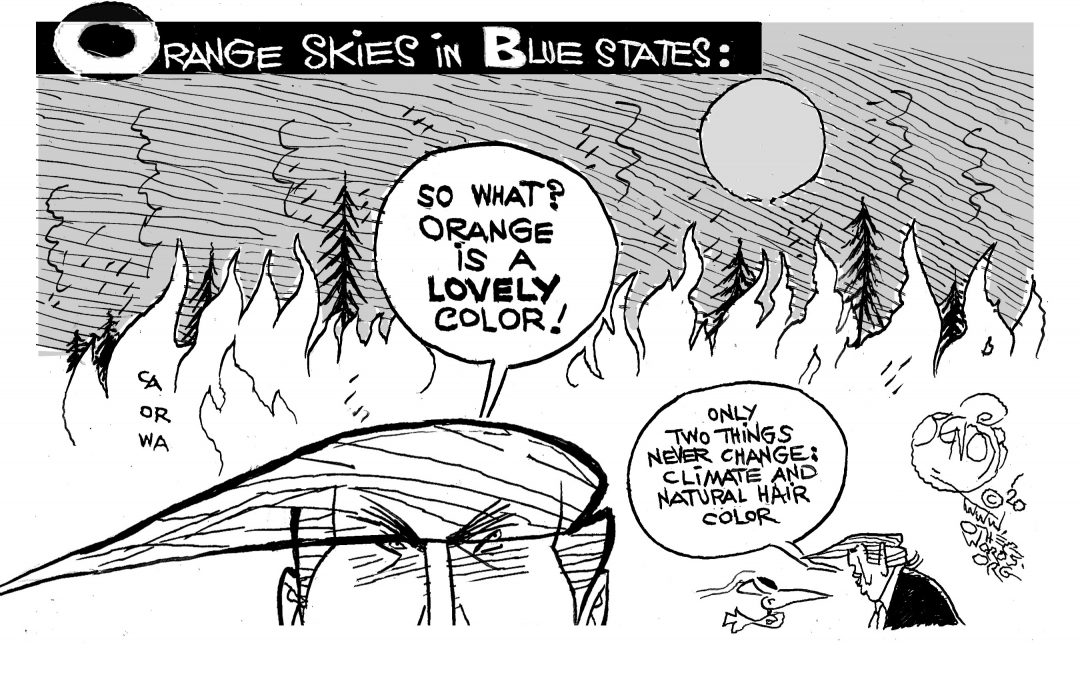 Trump's private COVID-19 assesesments were wildly at odds with his public statements.
By Peter Certo | September 16, 2020

Veteran journalist Bob Woodward recently released recordings in which President Trump vividly described how deadly COVID-19 could be as far back as January and February. Trump’s assessments were wildly at odds with his public statements and, more importantly, his resistance to public health measures that might have contained the pandemic early on.

This week in OtherWords, Mitchell Zimmerman reviews the president’s policy record in light of these new revelations and issues a stark condemnation. And Jill Richardson, who’s teaching at a university that recently had to suspend in-person classes because of outbreaks, reflects on her anger at how the administration’s incompetence has infected every corner of American life.

Also this week, in the wake of a $600 million settlement for victims of the Flint water crisis, Flint mom Nakiya Wakes shares her family’s heartbreaking story of lead poisoning. With thousands of communities at similar risk, she argues, it’s time to make clean, public water available to everyone in this country.

Meanwhile, with “gender reveal” parties sparking fires out west, Robin Savannah Carter shares her own story of how painful it can be for kids to have gender assignments forced on them, even by people who may mean well. And Jim Hightower runs the numbers on the CEOs supposedly cutting their own pay in solidarity with laid off workers.

Trump Knew COVID-19 Could Kill. He Just Didn’t Care. | Mitchell Zimmerman
Trump and his falsehoods are responsible for most of America’s 200,000 coronavirus deaths to date.

What the Flint Water Crisis Meant for Me and My Family | Nakiya Wakes
Take it from me: You don’t want to go through what we did. Every community deserves water, life, and dignity.

Let ‘Gender Reveal’ Parties Burn | Robin Savannah Carver
Even their creator says enough is enough. Let children discover themselves on their own terms.

I’m Still Mad About COVID-19. We All Should Be. | Jill Richardson
We needed a real pandemic response. Instead, we got lies, snake oil cures, and speculation on bleach injections.

Beware Corporate COVID Propaganda | Jim Hightower
CEOs say they’re cutting their own pay in solidarity with laid off or hurting workers — only, not really.

Save Lives. Fill Out Your Census. | Robert P. Alvarez
Taking the census ensures your community gets its fair share of funding — and representation — during the pandemic and beyond.

Killing Someone Is Not Like Missing a Golf Putt | Sam Pizzigati
Trump’s vile equivalence of a golf putt to police violence says a lot about the bubble America’s super rich live in.