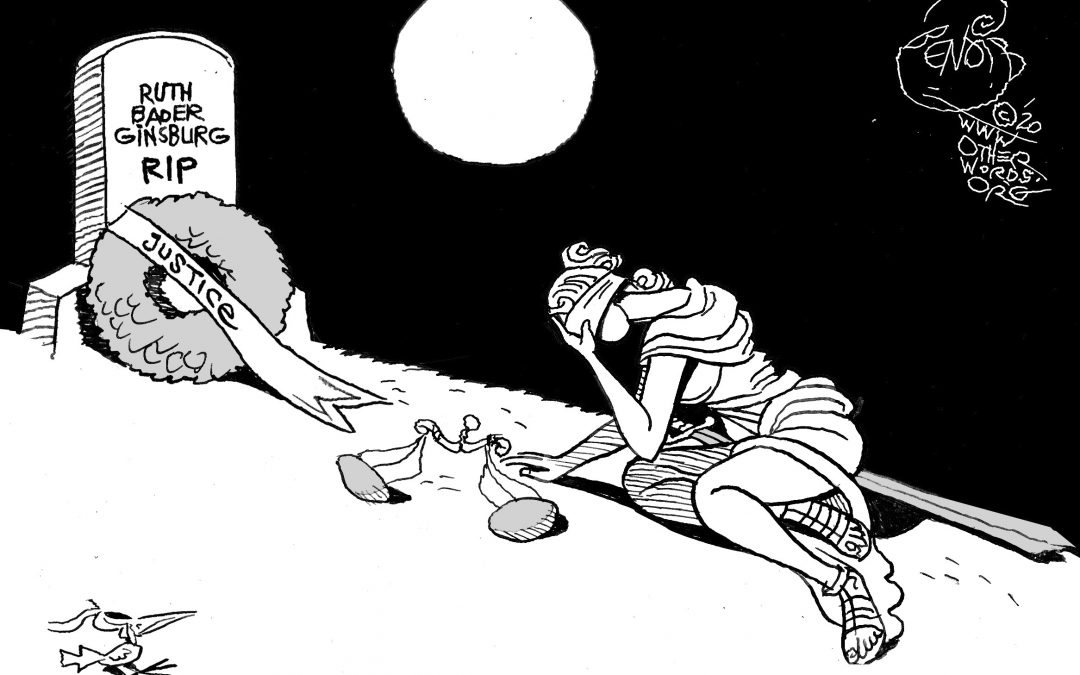 This week, millions of Americans are mourning the recently departed Ruth Bader Ginsburg and preparing for a pitched battle over her replacement on the Supreme Court.

In OtherWords, attorney Mitchell Zimmerman lays out the stakes for the court’s legitimacy if President Trump successfully fills Ginsburg’s seat — which would put the Supreme Court firmly in control of justices appointed by presidents who lost the popular vote.

Meanwhile, Sophia Paslaski shares the grief of millennial women who made an unlikely meme hero of Ginsburg, before concluding RBG would want them to fight on. And Jill Richardson takes a longer view of the fight of American women to control their own lives.

President Trump, meanwhile, seems more concerned about boasting about his jobs record in Midwestern swing states. But as laid off GM worker Chuckie Denison writes this week, Trump’s jobs record is, by some measures, the worst of any modern U.S. president. Workers won’t be fooled again, he thinks.

Finally, on the anniversary of a Soviet nuclear officer saving the world by refusing to order a nuclear in response to an erroneous radar warning, Olivia Alperstein says we need to make 2020 the year we ended the nuclear era.

Trump Lied to Heartland Workers | Chuckie Denison
Trump is bragging about his jobs record in the Midwest. So why didn’t he lift a finger when 14,000 GM workers were laid off?

Ginsburg Would Want Women to Fight, Not Despair | Sophia Paslaski
The late justice dedicated her career to women and other marginalized Americans, and we owe her the same faith she had in us.

If Trump Fills Ginsburg’s Seat, the Court’s Legitimacy Will Be in Crisis | Mitchell Zimmerman
We cannot afford a Supreme Court that has abandoned its constitutional duties to cement right-wing minority rule.

A New Plan to End the Unemployment Crisis | Ben Beachy
A new economic renewal plan would put millions of people back to work building a fairer, healthier, and more sustainable economy.

Time to Put an End to the Nuclear Age | Olivia Alperstein
2020 has been hard enough. The last thing the world needs this year is nuclear weapons.

When Men Legally Controlled Women | Jill Richardson
In this 100th year after the 19th Amendment, we have so much to lose. But if we fight, how much more can we accomplish?

Trump Knew COVID-19 Could Kill. He Just Didn’t Care. | Mitchell Zimmerman
Trump and his falsehoods are responsible for most of America’s 200,000 coronavirus deaths to date.

What the Flint Water Crisis Meant for Me and My Family | Nakiya Wakes
Take it from me: You don’t want to go through what we did. Every community deserves water, life, and dignity.

Let ‘Gender Reveal’ Parties Burn | Robin Savannah Carver
Even their creator says enough is enough. Let children discover themselves on their own terms.

I’m Still Mad About COVID-19. We All Should Be. | Jill Richardson
We needed a real pandemic response. Instead, we got lies, snake oil cures, and speculation on bleach injections.