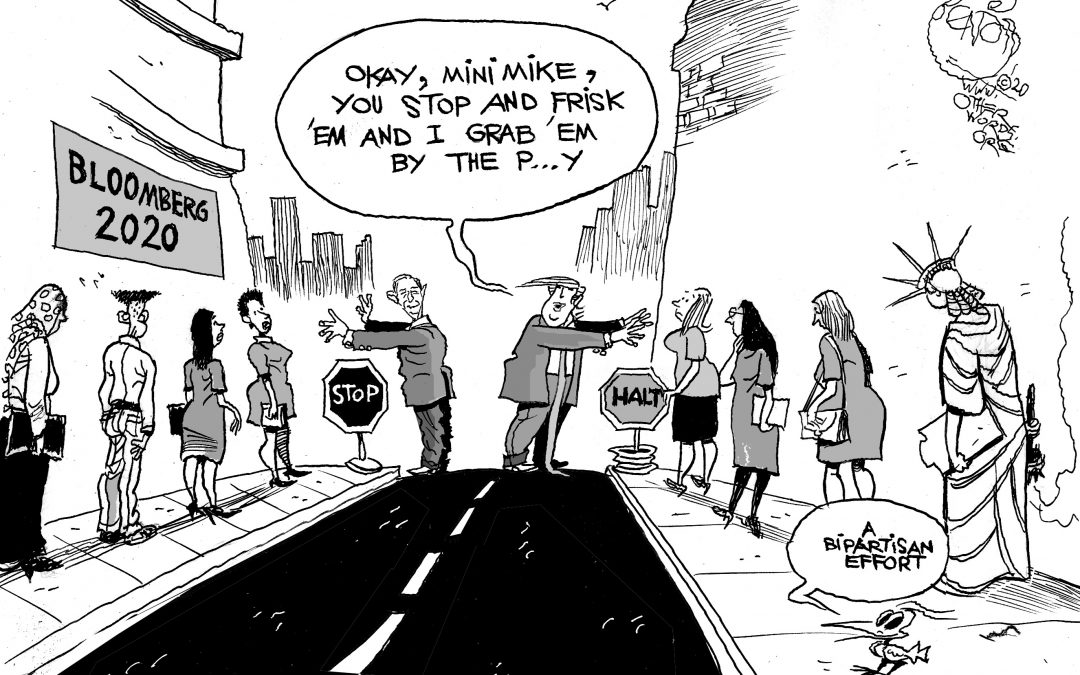 Last night, Democrats met in South Carolina for a raucous and contentious debate.

As primary season surges onward, cartoonist Khalil Bendib imagines an unflattering comparison between Mike Bloomberg’s past defense of “stop and frisk” policing and a notorious statement by a certain current president. And William Hartung says candidates need to start getting a lot more specific about their commitment to cutting military spending and investing in domestic needs.

Meanwhile, as Black History Month winds down, Tracey L. Rogers explains why February’s 28 days (or 29 this year) are never long enough to celebrate the resilience or cultural contributions of black Americans. And Dedrick Asante-Muhammad and Jamie Buell run the numbers from their research on black wealth, income, and education.

Also this week, Jill Richardson reflects on yet another “religious liberty” case at the Supreme Court seeking to enshrine anti-LGBTQ discrimination. And Jim Hightower mocks Trump’s wall for not being anywhere near as formidable as the president seems to believe.

PS. If you haven’t read OtherWords contributor Mitchell Zimmerman’s historical thriller Mississippi Reckoning, give it a look. The novel, which tells the story a death penalty case, draws in part from Zimmerman’s experiences in the 1960s civil rights movement and other history from the era. Here’s a link to a sample chapter on the experience of a black World War II hero on his return to Mississippi in 1946.

Reflections on ‘Black Excellence’ | Tracey L. Rogers
In some ways it’s toxic to demand that black people work twice as hard to get a seat at the table. But there’s no denying we’ve defied the odds.

Does This Economy Work for Black Americans? | Dedrick Asante-Muhammad and Jamie Buell
Unemployment is down for many black Americans, and wages are up — but the wealth gap remains.

It’s Time to Debate Pentagon Spending | William D. Hartung
It’s hard to overstate the cost — in dollars and security — of our many wars. What do the candidates say?

Stop Calling Harmful Bigotry ‘Religious Freedom’ | Jill Richardson
Anyone intolerant enough to disown a child is far less fit to parent than a gay person whose only “sin” is living authentically.

The Embarrassing Fall of Trump’s Wall | Jim Hightower
A climbing group in Kentucky built a replica of Trump’s wall. One climber topped it in 13 seconds. Another did it while juggling.

We Need to Treat Nuclear War Like the Emergency It Is | Olivia Alperstein
Alarmingly, the Trump administration is shredding arms control agreements and deploying “more usable” nuclear weapons.

A Broken Promise to Teachers and Nonprofit Workers | Jill Richardson
Trump wants to cancel student loan forgiveness for public servants. But what if you’ve already taken the loans?