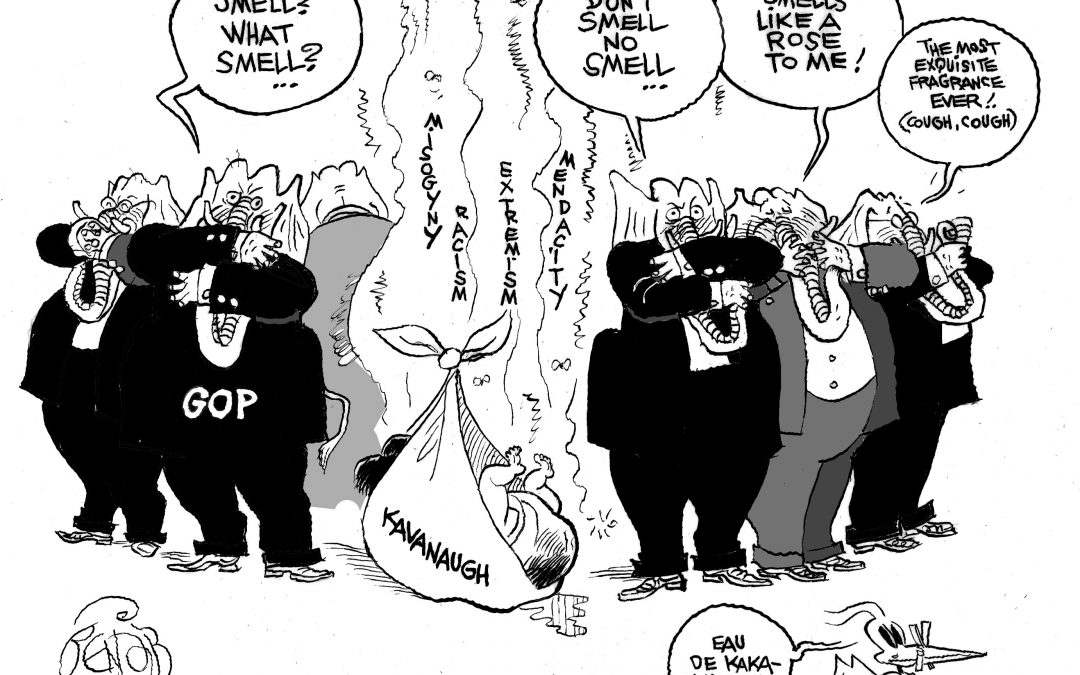 Will Christine Blasey Ford's riveting testimony — and a subsequent FBI investigation — have any impact on Senate Republicans?
By Peter Certo | October 3, 2018

Will Christine Blasey Ford’s riveting testimony — and a subsequent FBI investigation — have any impact on whether Senate Republicans confirm Brett Kavanaugh to the Supreme Court?

This week in OtherWords, veteran attorney Mitchell Zimmerman says Ford’s circumstantial evidence is much stronger than Kavanaugh’s. Still, Martha Burk worries that a “boys will be boys” mentality will prevail among Republicans. Cartoonist Khalil Bendib seems to concur.

Also this week, Jill Richardson argues that we need rethink masculinity itself. And Bob Lord agrees, calling on men to call out the abusers in their midst.

While the Kavanaugh charade carries on, so do other fights. Most jarringly, Frank Clemente reports this week, House Republicans used the distraction to quietly pass an enormous tax cut package for rich people and corporations. A fight to save the public Postal Service is also getting underway, as 22-year postal veteran Julie Bates writes.

The Mean Drunk and the Mendacity | Martha Burk
I fear the Senate will conclude that boys will be boys — and sometimes sexual predators — but they can still grow up to be Supreme Court justices.

We Need to Talk About Masculinity | Jill Richardson
If we taught men better ways of “being a man,” we wouldn’t have to teach women to cover their drinks.

Men: We’ve Heard About Assaults. Speak Up About Them. | Bob Lord
Women who report assault deserve to hear that we believe them, and that we can back them up — because we’ve heard the other side.

Don’t Arm This President with These Nukes | Olivia Alperstein
As President Trump gave a belligerent address at the UN, lawmakers rolled out legislation to ban “low-yield” nukes that raise the risk of conflict.

It’s Your Post Office. Keep It. | Julie Bates
Take it from a postal worker: If the U.S. sells its public mail service, consumers will lose big time.

I Don’t Smell Anything | Khalil Bendib
To the GOP, Kavanaugh smells like roses.

The Strength of Kavanaugh’s Accusers Is Truly Amazing | Aniqa Raihan
I know what it’s like to seek justice against all odds. The fact that women keep doing it speaks volumes.

America 2018: Even More Gilded Than America 1918 | Bob Lord
Wealth is more concentrated now than it was in John D. Rockefeller’s day.