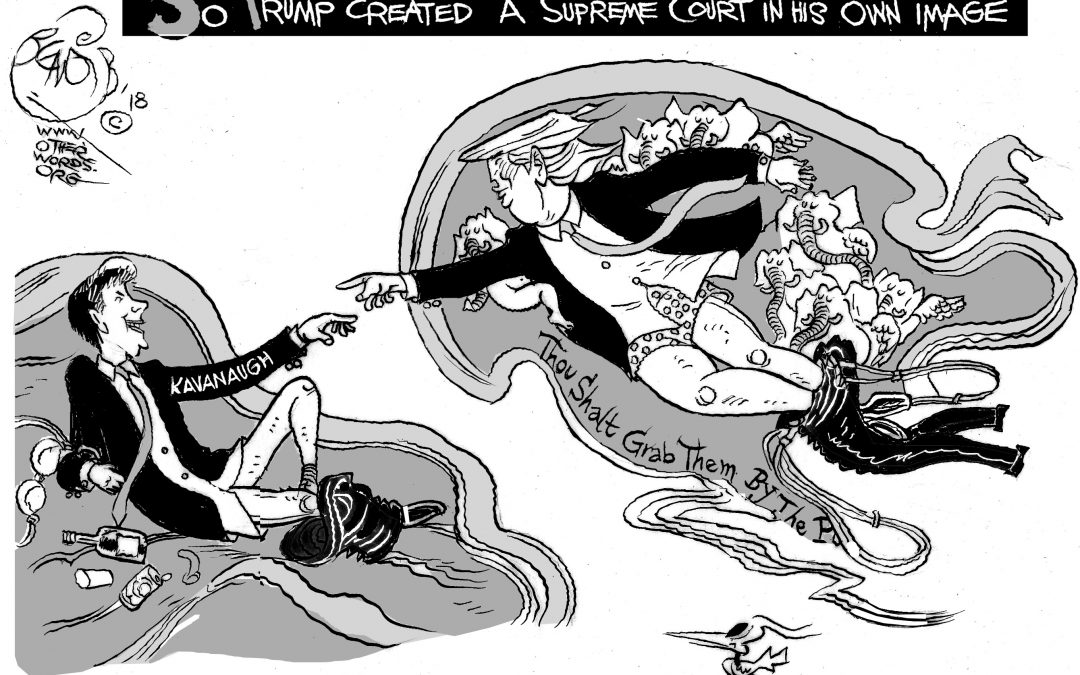 The unbelievable strength of Kavanaugh's accusers — and the cruelty of his defenders.
By Peter Certo | September 26, 2018

As Brett Kavanaugh prepares to face credible allegations of sexual assault before the Senate, the pressure is rising on Christine Blasey Ford and the other women who’ve leveled the accusations. Ford, it’s reported, had to leave her home to escape death threats.

This week, we have a pair of powerful survivor perspectives. Jill Richardson points out how unbelievably cruel the ongoing charade is to women who’ve endured assaults of their own. And Aniqa Raihan argues that given everything they’ve gone through, it’s amazing that Kavanaugh’s accusers have spoken out at all.

Meanwhile, Khalil Bendib has a sharp take on Kavanaugh’s affinity with the president who nominated him.

All this has been very on-brand for Trump. But George Faraday reports on something much more off-brand: The outsourcing of jobs by top federal contractors under Trump is on pace to hit record levels. In other words, Mr. “Make America Great Again” is actually subsidizing corporations that ship jobs overseas.

Also this week, Bob Lord crunches the numbers and argues that America today is more unequal than it was at the height of the Gilded Age. And Jim Hightower reports on some cowboys who hate the Koch brothers.

The Strength of Kavanaugh’s Accusers Is Truly Amazing | Aniqa Raihan
I know what it’s like to seek justice against all odds. The fact that women keep doing it speaks volumes.

The Unbelievable Cruelty of the GOP’s Kavanaugh Charade | Jill Richardson
When I hear people shouting on TV that an assault in one’s teens doesn’t matter, it feels like they’re shouting at me, too.

America 2018: Even More Gilded Than America 1918 | Bob Lord
Wealth is more concentrated now than it was in John D. Rockefeller’s day.

A Court in Trump’s Own Image | Khalil Bendib
Though shalt grab them by the judiciary.

Nike Says ‘Believe in Something.’ Can It Sacrifice Something, Too? | Jessicah Pierre
The company has made millions off Colin Kaepernick’s message. That money should go right back to the cause that message supports.

Future Generations Will Mourn What the EPA Did on 9/11 | Olivia Alperstein
The White House wants to clear the way for frackers to release more methane, which poisons communities and torches the climate.

Mainstream Media Outlets Counted the Left Out Way Too Soon | Justin Anderson
Progressive challengers are winning the battle of ideas in the Democratic Party — and more than a few primaries.