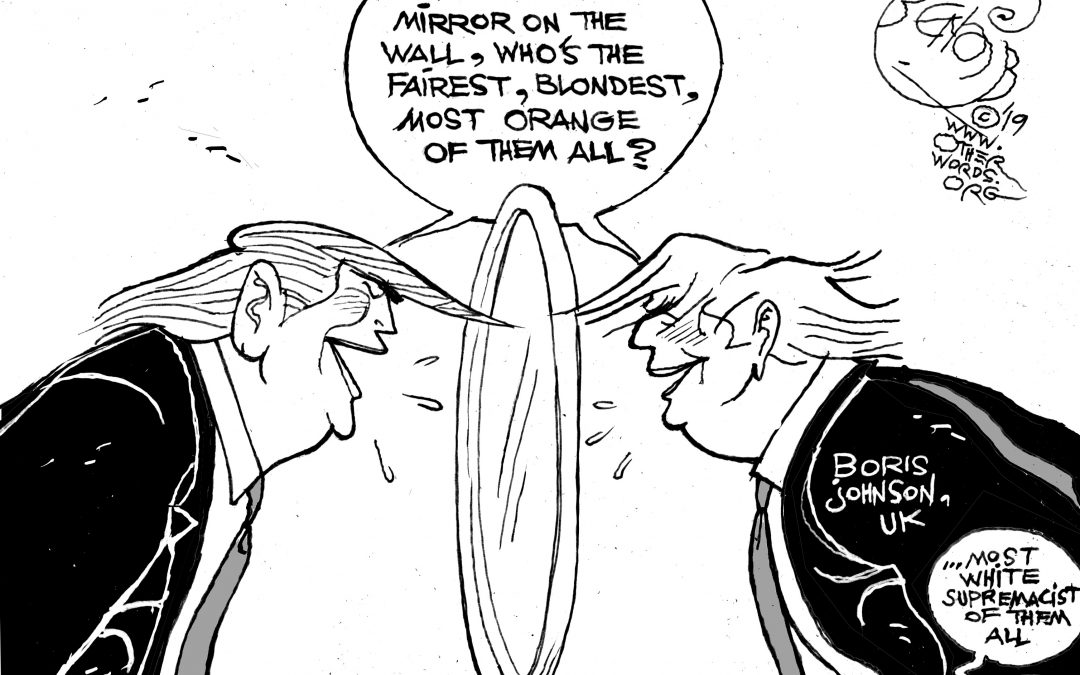 If you're like me, politics has left you in need of a little holiday cheer.
By Peter Certo | December 18, 2019

If you’re like me, politics has left you in need of a little holiday cheer. This week in OtherWords, Jim Hightower offers some from Texas — not of the saccharine variety, but of a real victory by working people against big polluters.

And as holiday shopping season continues, Dedrick Asante-Muhammad and Emmanuelle Aruta offer a recommendation: support Native-owned businesses whenever you can. (And if you missed Sarah Anderson’s piece last week on Toys R Us workers staging a holiday comeback while fighting for their jobs, do give that a look too!)

On a grimmer note, Sarah Gertler — whose Washington, DC synagogue was recently defaced with anti-Semitic graffiti — takes on the Trump administration for curbing Palestinian rights activism in the name of combating anti-Semitism, all while openly allying with real anti-Semites.

Also this week, Brian Wakamo calls on Major League Baseball to save the minor league teams in the towns that made baseball America’s pastime. Bobbi Dempsey shares a touching story about growing up with Sesame Street. And Olivia Alperstein shares some alarming research on the dangers of liquefied natural gas, or LNG.

This will be our last package of new content in 2019, so I hope it tides you over. In our next two newsletters, we’ll share some evergreen favorites before we start churning out new content again on January 8. If we produce anything new before then, we’ll be sure to get it on the website at OtherWords.org.

Thank you to our readers for reading, our writers for writing, our editors for publishing, and our hardworking staff — especially our outreach assistant Caleb Crowder and digital strategist Justin Smith — for getting these op-eds out each week.

Here’s wishing you a merry Christmas, a joyful holiday season, and a happy new year from all of us at OtherWords and the Institute for Policy Studies.

A Holiday Gift to the People, from the People | Jim Hightower
How small shrimpers in Texas beat a giant polluting corporation — just in time for the holidays.

Support Native Businesses This Holiday Season | Dedrick Asante-Muhammad and Emmanuelle Aruta
Native American products enrich many corporations — but often not Natives themselves. We can change that.

Trump’s Judaism Order Has Nothing to Do With Fighting Anti-Semitism | Sarah Gertler
The man who called neo-Nazis “very fine people” has no business defining anti-Semitism for the rest of us.

Stop the Spread of Liquefied Natural Gas — Before It’s Too Late | Olivia Alperstein
A liquefied natural gas disaster could make an oil spill look like a picnic.

The Education Department Is Ripping Off Defrauded Students | Jill Richardson
Students who got defrauded by for-profit colleges were going to get loan forgiveness — until Betsy DeVos showed up.

It’s Like Looking in a Mirror | Khalil Bendib
Who’s the orangest of them all?

A Holiday Comeback for Toys ‘R’ Us? | Sarah Anderson
Retail workers are organizing to make sure private equity firms can’t make money by putting people out of work.

What Trump and the GOP Learned from Obama | Rev. Susan K. Williams Smith
They learned to embrace popular organizing and to fear — and suppress — the black vote.

Standardized Tests Are Biased and Unhelpful | Jill Richardson
Research shows they hurt poor students and students of color, while failing to predict success in college.