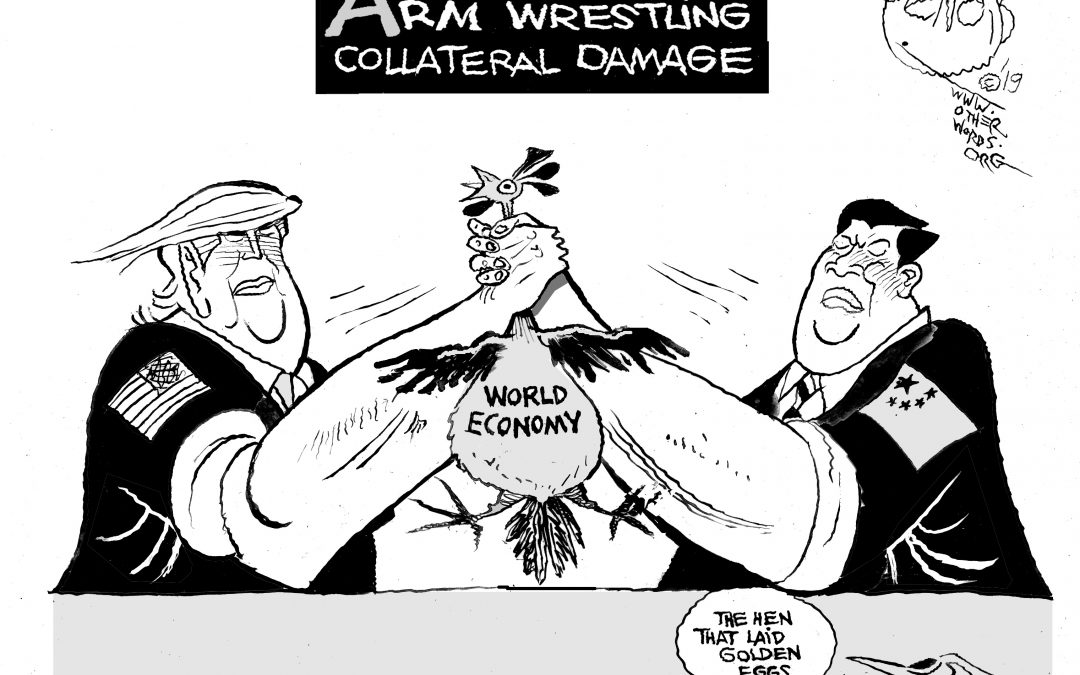 The Trump administration recently announced a $16 billion aid package for farmers victimized by its own trade policies.
By Peter Certo | May 28, 2019

The Trump administration recently announced a $16 billion aid package — the second of its kind — for farmers victimized by the administration’s own trade policies.

This week in OtherWords, Ben Lilliston explains how the president’s erratic, confrontational trade policies are hurting small farmers (among other “collateral damage,” as cartoonist Khalil Bendib observes). But while those disruptions inflict real pain, they also expose the frailty of a farm economy built for the big players, not the little ones.

Also this week, Trump has ordered more troops to the Middle East to scale up tensions with Iran. In OtherWords, Noah Habeeb recalls a time when Trump embarrassed his GOP rivals by ridiculing their support for the “big, fat mistake” we made in Iraq. So why is he going along with a bigger, fatter mistake in Iran?

Meanwhile, Brian Wakamo explains what Major League Baseball teaches us about corporations. Jim Hightower condemns border authorities for locking up Good Samaritans. And Jill Richardson reflects on how to live constructively with fear about climate change.

War with Iran Would Be a Huge Sellout for Trump | Noah Habeeb
Candidate Trump called the Iraq war “a big fat mistake.” Why is he considering an even bigger mistake in Iran?

MLB Players Are Getting Stiffed | Brian Wakamo
If corporations treat millionaire assets this way, imagine how they’ll treat you.

Dealing with Climate Fear  | Jill Richardson
If you feel powerless, remember that the biggest change you can make is to support leaders who think our planet is actually worth saving.

Foreign Aid That Costs an Arm and a Leg — Literally | Phyllis Bennis
The U.S.-funded Israeli military is shooting so many unarmed Palestinians that the UN is warning of an amputation crisis in Gaza.

America Needs a Long-Term Care Program for Seniors | Sarah Anderson
By 2035, seniors will outnumber children. A new plan in Washington state shows how we can care for them — and for their caretakers.

The Disparity Behind Anti-Abortion Laws | Jill Richardson
Laws restricting reproductive freedom come out of a culture that doesn’t see women’s sexuality as equal to men’s.

Peter Certo is the editorial manager of the Institute for Policy Studies and the editor of OtherWords.org