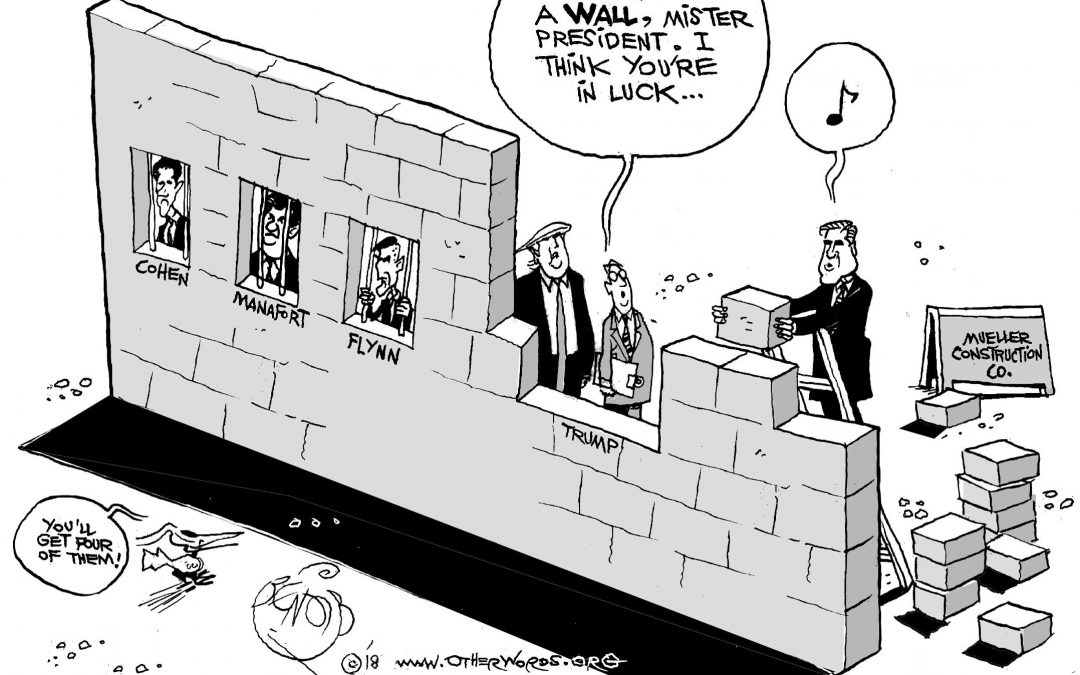 Hundreds of thousands of federal workers this year faced the prospect of getting furloughed right before Christmas.
By Peter Certo | December 21, 2018

Call me naive for even implying it might have been otherwise, but the news barreled right on into the holiday season. Hundreds of thousands of federal workers this year faced the prospect of getting furloughed right before Christmas, all over that border wall we keep hearing about.

This week, cartoonist Khalil Bendib says Trump might end up getting his wall after all — just not the one he thinks. And I offer an uncharitable eulogy for outgoing House Speaker Paul Ryan, who accommodated the White House’s worst instincts to the very end.

Meanwhile, amid bipartisan grumblings over massive Pentagon waste, Lindsay Koshgarian proclaims the subject a safe one to raise with your relatives over the holidays. Something that should be a lot more bipartisan, Leslie Watson Malachi adds, is preventing politicians from literally stealing people’s votes, which appears to have happened in North Carolina.

Now we’ll be taking a short spell to rest. This will be our last package of new content before January 9. Hope you had a merry Christmas, and wishing you a happy new year!

A Point of Holiday Agreement: Stop Wasting Money on the Pentagon | Lindsay Koshgarian
Military leaders literally don’t know what they’re doing with our money, but they want more. People on the left and right have had enough.

We’re Learning the Truth About ‘Voter Fraud’ | Leslie Watson Malachi
There’s no moral difference between suppressing the vote through the law and literally stealing ballots. Both may have happened in North Carolina.

The Green New Deal: Let’s Get Visionary | Norah Vawter
We need a plan to save the planet while creating great jobs. Actually, there is one.

Get the Federal Government Out of Washington | Brian Wakamo
Relocating federal agencies to the heartland would create jobs, revitalize cities, and put government more in touch with the people.

Paul Ryan Was a Villain and No One Will Miss Him | Peter Certo
The outgoing House speaker’s entire career was a cash grab for billionaires, capped off by a low trick to literally starve children.

Don’t Let Them Take Your Post Office Away | Jim Hightower
America’s most popular public service literally delivers for its people. Anti-government zealots want to sell it off.

New Year’s Affirmations | Jill Richardson
In the past, I made lists of what I wanted to do differently. This year, I’m cataloging everything that’s going right.

You Wanted a Wall, Mr. President? | Khalil Bendib
Maybe you’ll get four of them.

Politics in 2019 Will Have a Lot More Backbone | Tracey L. Rogers
As Democratic leaders sharpen their challenge to President Trump, movement leaders are stepping up to challenge the party leadership.

Lame-Duck Republicans Are Waging War on Heartland Democracy | Nicole Braun
I teach sociology. Believe me — nothing good will come of what they’re trying to pull here in Michigan and beyond.

Innovation Used to Benefit Workers. Can It Again? | Bob Lord
Machines can make jobs better, but a tiny class of bosses uses them to make jobs disappear. It doesn’t have to be this way.